The Missouri Youth Pork Ambassador Program is designed to provide youth with an opportunity to become actively involved in the pork industry. The program will help youth develop strong relationships with both pork producers and allied industry members. It is an opportunity to learn about pork production and the industry and to improve communication and leadership skills.

The main goal of the Youth Pork Ambassador is to promote the Missouri Pork Association and the pork industry at various events. The successful candidate will gain valuable experience and develop relationships that will last a lifetime. The Ambassador will also receive a $1,000 scholarship, payable to a technical school, community college or 4-year University at the end of the program.

For 2018, the Missouri Pork Association selected three youth for the program: Matthew Morgan from Lamar; Kendra Betz from Trenton and Marlena Long from Paris. 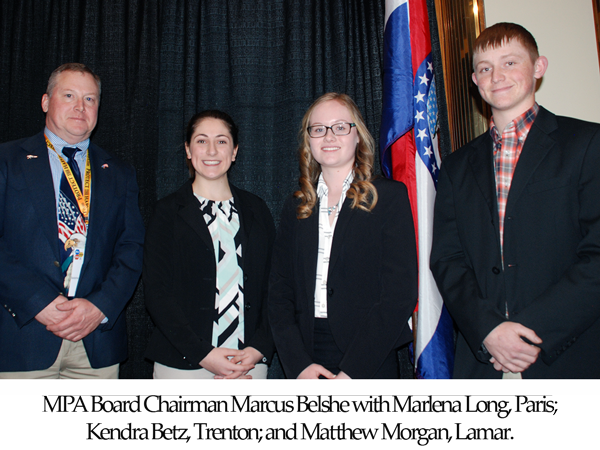 Matthew is the son of Rick and Melinda Morgan from Lamar. He currently works on the family diversified crop and livestock farm. Daily chores may include mowing and raking hay, working on irrigation, planting and monitoring grain bins. They have approximately 100 sows farrow to finish, 60 registered Angus Cattle and 30 ewes. The family markets to local butchers/processors, farmer’s markets, individuals and a local Casino. The family has developed a video that is posted online to help market products.

Matthew is President of the Lamar FFA and has been an Area IX FFA Officer. He has participated in the Missouri AgriBusiness Academy, HYPE Academy and HYMAX Academy. He is President of the Learn-A-Do 4-H Club. Matthew is also active in Oakton United Methodist Church, Skills USA, Missouri Community Betterment, Meals on Wheels and is a youth representative for the University of Missouri Extension Council. He also shows swine, beef and sheep at youth livestock shows.

Upon graduation, Matthew plans to attend Crowder College for two years, then transfer to Missouri State University and receive a degree in animal or plant science. His ultimate goal is to return to the family farm.

Kendra is the daughter of Scott and Sherri Betz from Trenton. She currently works on the family grow-finish hog operation, contracting through Smithfield. Her duties include installing and removing mats and heat lamps, giving shots, moving pigs and barn maintenance. The family also has a 250 cow-calf operation and a small flock of sheep.

Kendra is actively involved in her FFA chapter, and has been the president of the Grundy R-V FFA for two years and is currently the Area II FFA President. She was 6th in state in extemporaneous speaking and has competed on two other state teams. She has received Chapter Star Farmer and the State FFA Degree. She is also involved in FBLA, Quiz Bowl, the National Honor Society and 4-H, where she has served as her Club’s treasurer for the last few years. Through 4-H, she will be competing in Nebraska at the 4-H National Shooting Sports Competition this summer in archery.

After graduation, Kendra will attend Missouri State University with plans to majori n Agricultural Business and minor in Animal Science. She hopes to become a sales representative for an agricultural company, then pursuing a career with the USDA or the Missouri Department of Agriculture.

Marlena is the daughter of Greg and Laura Long from Paris. She currently works on the family farm raising Shorthorn cattle, pigs and row crops. She also sells show pig feed and wood chips for bedding to friends and neighbors and does artificial insemination work for numerous pig farmers in the area. Last year, she worked for O’Bannon show pigs in exchange for buying pigs.

Marlena is currently president of the Paris FFA Chapter and Area IV FFA. In 2018, she was a member of the 1st place FFA Missouri Meats Evaluation Team and also placed 1st individually.  Her team went on to place 5th in the nation, with Marlena placing 10th individually.  She was also a member of the Paris FFA Sales Team in 2017, where they finished 1st at the state level and 2nd in the nation. She has attended the HYPE Academy, Missouri Agribusiness Academy, HYMAX, and the Washington Leadership Conference. She won the State FFA Pork Speaking Contest in 2016 and was a guest speaker for the Pork Expo’s “In the Show Ring” program.

H Congress. She is treasurer of the Missouri Shorthorn Association, captain of the Varsity Cheerleading Squad, and has participated in Quiz Bowl, Science Olympiad and Math Contests representing her school.

She is on track to graduate in May with 60+ dual credit hours that will transfer to the University of Missouri in Columbia, where she will enter as a Junior in the Fall. Marlena plans to major in biochemistry and minor in animal science. She plans to explore options in veterinary medicine.